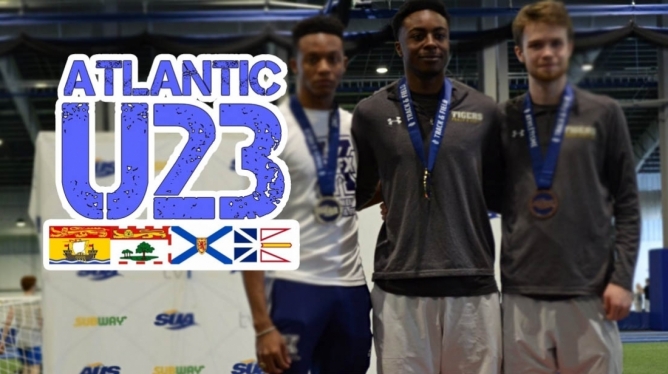 How did you first get involved in track and field?
I thought about trying out track and field in grade 9 but I never got the chance to. When I got to Cobequid Educational Centre (CEC), my grade 10 math teacher (who also happened to be the track and field head coach) brought up the sport. I asked him about it, and I decided I would try it out. 4 years later and I'm still competing.

Although you contested numerous events throughout your early years in the sport, including sprints, jumps, and throws, you quickly gravitated towards the horizontal jumps, particularly triple jump. What initially sparked your interest in jumping?
There was an in-class meeting for those who signed up for jumps. The coaches showed us videos of slow-mo long jumps and triple jumps. After watching those videos, I was immediately interested.

In addition to athletics, you played on the basketball and soccer teams while at CEC. How did your participation in these other sports help you become a better jumper?
Playing both sports helped me stay in shape and helped with my speed and strength.

In narrowing your focus and pursuing just one sport competitively, what led you to pick athletics over basketball or soccer?
I chose competing in athletics because I enjoyed the sport and had more success with it. I also chose it because I was responsible for my performance.

After graduating from CEC in 2019, you immediately enrolled in the Bachelor of Engineering program at Dalhousie University. What contributed to your decision to attend Dal?
What contributed to my decision to attend Dal was competing as a part of the varsity track and field team. I learned from the Head Coach (Rich Lehman) that I could compete with the team while attending the Dal campus in Truro.

At your first AUS Track and Field Championships earlier this year, you captured gold in the triple jump with a best attempt of 13.53m. What were your goals heading into the competition, and did you expect to top the podium in your rookie year?
Heading into the competition, my goal was a podium finish. At the start of the year, I wasn't sure what the competition would look like. As the year progressed and I competed at meets, I believed that I could top the podium if I continued to put in the effort during training.

After capturing gold at the AUS Championships, you competed at the U Sports Championships - a feat few have the opportunity to do in their rookie year - and placed 11th with a personal best jump of 13.75m. Tell us about your experience competing as a rookie as these national championships - were you nervous to compete at this level?
Leading up to my first jump, I was quite nervous. Overall, it was exciting competing with some of the best athletes across Canada.

Although predominantly a horizontal jumper, you've also contested the high jump, including at the AUS Championships where you placed 6th with a personal best height of 1.70m. What are your goals and aspirations in the high jump?
I didn't practice high jump during the year because of my focus being on triple jump. Once I'm at the Halifax campus, I'll be able to train high jump more and jump higher than 1.70m.

During the varsity indoor season, what does a typical week of training look like for the Tigers jumps squad?
Mondays are active recovery days. Tuesdays and Fridays we start with some sprints and then go to the gym. Our workouts at the gym on these days are mostly squats, deadlifts, cleans, and step-ups. Wednesday's consists of core and hip exercises. Thursdays and Sundays are our triple, long, and high jump practices at the Canada Games Centre, and Saturday's are off days.

Speed is of course a very important component of being a successful horizontal jumper. What sort of workouts do you do to work on your runway speed?
We start with hill sprints ranging from 20m to 60m. As the weather gets colder, we transition to doing our sprints indoor; indoor we do our flys and sled sprints.

All around the world, 2020 has been nothing short of a disappointing year for sports, and with the cancellation of the competitive indoor season and the one-year postponement of the Canada Summer Games, 2021 is shaping up to look not much better. Athletically, what are your hopes for 2021?
I'm hoping to break the 14.00m barrier over the course of next year and improve my long jump to try and get closer to 7.00m. I plan on competing in a few meets over the summer, if there are any, and continuing my training for the following school year.

Aside from jumping, what are some of your other hobbies?
Playing basketball with my friends and sleeping.