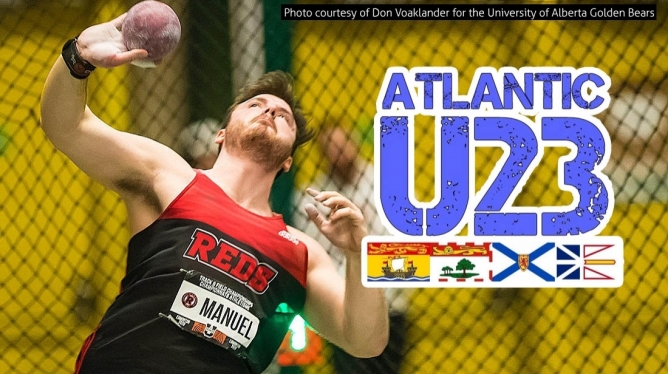 5 quick questions with Jarod:
Favourite Disney princess? Don’t have one
Pancakes or waffles? Pancakes
What is your most prized possession? My goalie mask, which was signed by Patrick Roy and Carey Price
Would you rather run a 10,000m on the track or contest the decathlon? Decathlon - I would love to try all of the different events, and the longest run is only 1500m
If you owned your own restaurant, what would you name it? The Thrower’s Corner™, and I’d have large portions for all my fellow throwers out there

In addition to throwing, you grew up playing several other sports, including baseball, hockey, and volleyball. What are some of the shared skills between these sports, and how did participating in each help you succeed in the others?
Playing so many different sports definitely had an impact not only on my other sports at the time, but also on my performances as a thrower. At their core, these sports share many foundational skills - movement patterns, reaction time, etc. - but each also allows you to develop different elements that can’t be obtained by only playing one sport. I believe that in my case, playing all these different sports allowed me to develop a solid athletic base that I can use to adapt to any sport I now attempt. For example, when I began throwing in track and field, to me it was similar to the throwing I did while playing baseball - it provided me with the basic feelings and understanding of the movements required to throw, which I was then able to develop further for my specific throwing events. That was also one of the reasons I was drawn to throwing.

With multiple sports to choose from - including a combination of them - what led you to focus exclusively on track and field following high school?
There was a few reasons for focusing on track. First, I had already chosen to attend UNB, and I knew they had a track program. They also had the other sports that I had previously competed in, but they were above my skill level. Second, I wanted to give track and field my all to see what I could do - I had never seriously trained for the sport and I never had a coach, yet I still medaled at each of the NBIAA Championships from grades 10-12, so I wanted to see what my potential was with some proper training. Finally, after playing so many team sports growing up, I enjoyed the individual aspect that track and field provides, in that even though we compete for a team championship, my performance was mostly dictated by my own dedication and discipline.

After graduating from École Régionale De Baie-Sainte-Anne in 2016, you immediately enrolled in the Business Administration program at the University of New Brunswick. What contributed to your decision to attend UNB?
I actually enrolled in the Bachelor of Recreation and Sport Studies, offered by the Faculty of Kinesiology at UNB. It was only after my first term at UNB that I found my passion for business and transferred into the BBA program. In terms of choosing UNB, I was looking for a sport management program and they were the only school in Atlantic Canada with such a program (which, looking back, is now irrelevant since I’m in business). I also had a cousin who attended UNB, and I had been on the campus several times before for volleyball tournaments so I knew how beautiful the campus is and was familiar with the university. Furthermore, I was offered a $40,000 academic scholarship, which sealed the deal. Track and field was not part of the decision, as I had already chosen UNB when I joined the team.

At this year’s U Sports Track and Field Championships, you scored big personal bests to place 6th in both throwing events, and notably were only 31cm shy of the podium in the shot put. Tell us all about this competition and your successful performances.
Going into the Championships I felt really good. My season up to that point had been somewhat disappointing, but I knew that I just hadn’t really put all of the pieces together yet was poised for a big breakthrough eventually. I tend to perform best under pressure and that’s exactly what happened. My first throw in both events was rough, but once I settled in everything just came naturally. I went with the flow and tried to improve every round, and just focused on what I could control and not how the others were doing. In shot put, I knew I was in the fight once I PB’d in round 4, and then went even bigger in round 5 to sit only 5cm from bronze heading into the final round. The weight throw went almost exactly the same way, except the big throw I had been waiting for I pulled slightly out of the sector which, after reviewing the live stream, would’ve likely placed me 4th. Overall I was pleased with my performances, as even though I slightly missed my goal of two top-5 finishes, there was only one thrower who beat me in both events.

The year prior, you placed 7th in the shot put and 8th in the weight throw at the U Sports Championships. How did competing at these Championships prepare you for a stronger showing at the next year’s event?
Competing at the Championships the year before definitely played a huge role in my performances at this past year’s event. In my first appearance I was mostly just trying to compete at my best and hopefully make the final in at least one event, and my strong performances showed me that I could compete with the best in the country. I was able to use that experience to come back this past year and not just focus on the final but try to push for not only a top-5 finish but potentially make it onto the podium. The U Sports Championships are a huge event with a lot of athletes, something that we don’t see often in the AUS, so my first experience definitely helped me get used to that and be prepared for this past year.

Last month, the Canada Games Council announced that - for the sport of athletics - they would add one-year onto the eligible age category, meaning that the same cohort of athletes eligible for the Games in 2021 will remain eligible in 2022. As an athlete whose year of birth falls within this added year, how happy were you to hear that you would remain eligible for the Niagara Canada Games?
I was very happy that they pushed the age categories back another year. The age category at my first Games was U23, meaning I would be ineligible for the 2021 Games by 4 months. However, I was very excited when they initially changed the age categories for 2021 to U24, so it was great that they pushed it even further to allow us 1998-born athletes to still be able to compete at the Games we’ve been preparing so long for. It does put some of us in a tough position, though, as I know in my case the initial Games lined up perfectly with the end of my undergrad so now that I’m still eligible I have to balance my preparation for the Games with the next steps of my life.

Between the added year as a result of the Games’ postponement, and the added year as a result of athletics moving from a U23 sport to a U24 sport, the Niagara Games will see athletes of up to two years older than those that would typically compete at the Games. Due to the expanded age category, do you think stronger performances will be necessary for athletes to make it onto the podium?
I do think it will take a bit more to make it onto the podium. Compared to the other events, the throws have a big difference between ages due to differences in implement weights, particularly when moving up to the senior category. Younger athletes will have an extra year under their belt with the heavier implements, and that in itself will make stronger performances required.

Having competed in a previous edition of the Canada Summer Games, do you have any goals in mind for the 2022 Games?
I do - the podium. I’ve been chasing that goal since I found out I would be eligible for these Games, and I expect to be in contention for a medal.

While we’ve had numerous teammates of yours appear on AtlanticU23 over the years, you are the first Reds thrower to be featured on this series. In a non-pandemic year, what does a typical week look like for the throwers during the indoor season?
Our weeks typically all look the same, with minor changes depending on which point we’re at in the season. We normally practice our throws 3 times per week and lift 3 times per week, alternating each day, with a rest day on Saturday if we’re not competing. This schedule usually stays consistent, just changing the workouts as necessary.

With the varsity indoor season now officially cancelled, what do the next few months have in store for the UNB throwers?
For the most part we’re just trying to stay fit and prepared by doing what we can at the moment. It’s tough, as we don’t have a place to throw, so we’ve primarily been focusing on increasing our strength levels in the gym. Hopefully we’ll have access to throw in the new year, and will be able to get into a more consistent training routine similar to what we would see in a non-pandemic season to get prepared for the possibility of somewhat of a summer season.

Due to a sudden rise in the number of COVID-19 cases in each of the Atlantic provinces, two indoor season-openers were cancelled - the Red and Black Open in Saint John, and the Athletics NS Last Chance Meet in Halifax - and the rest of the season remains up in the air. Do you expect we’ll see any indoor meets successfully take place in Atlantic Canada this winter?
At this point, I’m not sure. We’ll have to wait and see how things are looking in January, as I imagine there will likely be some outbreaks related to the holidays. The uncertainty of our current situation makes it tough to plan anything ahead and allow for competitors from different health zones to compete against one another. I know that the provincial sport organizations are doing everything they can to try and make things happen, so if things clear up there is definitely the possibility that there may be a few meets.

Aside from throwing, what are some of your other hobbies?
Between my university studies, throwing and other things I’m involved in, I don’t have much time for hobbies. I enjoy spending time with my friends and family, occasional video games, and staying active in different ways. I really enjoy trying new sports - this summer I picked up golf and also tried out tennis and disc golf.

In It for the Long Run: Jim Finlayson | Mr. Drover Podcast
Posted 3 weeks ago