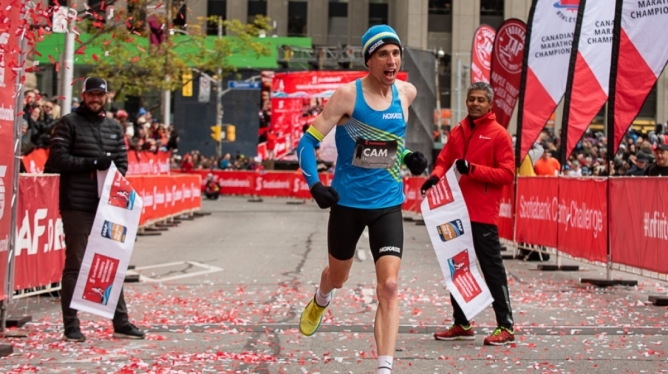 Olympians and national record holders have competed at the lululemon Toronto 10k over the years, but none have been as celebrated as Cam Levins who will make his debut in the race June 15th.

The 30-year-old from Black Creek, British Columbia will return to the city where, on October 21st, 2018, he beat Jerome Drayton’s 43-year-old Canadian marathon record with his 2:09:25 debut at the distance.

“I think this is a fun race,” Levins said from his home in Portland, Oregon this week. “I love going into Toronto really any chance I get and racing there. I have had such good experiences there in the past.”

Levins spends part of the year, especially before major races, training in Cedar City, Utah the home of his alma mater, Southern Utah University. The altitude is roughly 1,780m (5846 feet) and perfect for distance running. During the early spring he spent several weeks there preparing for the London Marathon. Then he hurt his knee and was forced to withdraw from London. The lululemon Toronto 10k will mark his first race back.

“I had a large amount of physiotherapy I had to go through, but it seems good now,” he says admitting he had possibly trained too hard for London. “It’s frustrating to put all that work into my buildup and then have something else pop up quickly that limited my ability to be prepared.

“It is not difficult for me to look back and say that was the right decision to make but ultimately it’s still frustrating to miss out on a good race.”

Levins will be hungry to test himself. He is the former Canadian 10,000m record holder having run 27:07.51 for the distance in Eugene, Oregon four years ago. Although he represented Canada at the 2012 Olympics, the same year he won both the 5000m and 10000m at the NCAA championships, he missed the Rio Olympics. Now he has set his sights on earning a place on the start line of the 2020 Tokyo Olympic marathon.

“I don’t think most athletes would pass up an opportunity to go to the Olympics once, twice or how many times,” he says. “And making an Olympics again would be another way to show myself that I am back in it. I am really hopeful if I continue to improve I can get a competitive placing there. I really don’t know where my limits are. I think I can do some good things at the Olympics in the future in the marathon.”

First, however, he will be at the lululemon Toronto 10k start (Queen St and University Avenue) on June 15th. There, among others, he will face 22-year-old Sergio Villaneuva who was 4th in this race a year ago in a time of 30:46 and won the 2018 Canadian 10,000m title.

The race is the third in the 2019 Canada Running Series and worth double points to the athletes. The women’s field is headed by London’s Leslie Sexton who won the overall Canada Running Series title last season. The 32-year-old is coming off a huge personal best marathon time of 2:31:51 which she recorded in Prague, May 5th.

Although she focuses more on the marathon these days, she also won the lululemon Edmonton 10k last season which is another Canada Running Series event.

“I was really happy with the (Prague Marathon performance).,” says Sexton, who was also the 2017 Canadian marathon champion. “I think I have been in around 2:32 - or faster - shape for a few marathon builds but hadn’t got it done yet. So, it was almost a relief to run that and run a PB because my best time was still from 2015.

Although Sexton must carefully return to 10k training following Prague she will face Rachel Hannah, the 2015 Pan Am Games marathon bronze medalist who will have even less recovery having raced the Ottawa Marathon May 26th. Then there is the unpredictable Sasha Gollish. A 2015 Pan Am bronze medalist at 1,500m she ran her marathon debut in Houston in January finishing in 2:32:54.

Although the lululemon Toronto 10k sold out on the very first day of registration Torontonians are encouraged to come out and cheer on the 10,000 runners who will make up this year’s field. Runners can expect a well-organized event since it’s part of the Canada Running Series. And, they will have the chance to run with the renowned Cam Levins along Toronto’s waterfront.